On reading the title don't think for a minute that this will be a sad post. In fact I couldn't be jollier.
I'm still very much in love with my wax resist technique (described in the previous post). I've been creating new designs and logging them in my sketch book, as it's so easy to forget once a pot has been sold.
But I'm very pleased to have rediscovered some of my older glazes that I'd put the lid on and shoved to the back of the workshop. I thought that I would possibly never use my bright blue glaze again because it was fiercely bright and not to everyone's taste, but after I'd painted on the black designs I thought immediately that blue was an obvious choice. 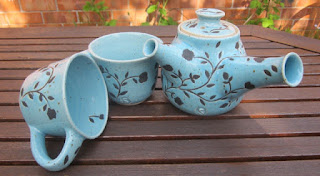 I also used a heavily speckled stoneware clay to add a bit more interest because the speckles would burn through the glaze. 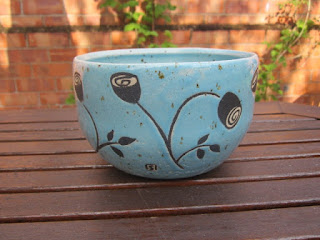 So the glaze that I thought was too bright for any future use was now transformed to 'just right'. 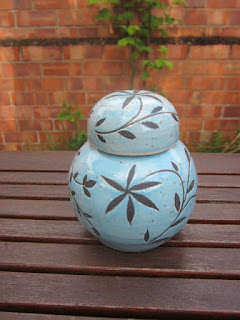 And here's a thing....
I painted this teapot (below) with a light green underglaze. I intended to wax the pattern as usual and then dip it in a white satin glaze. 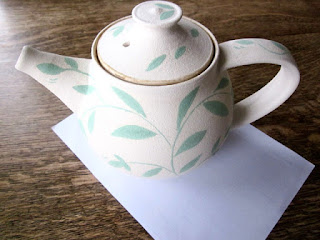 However, I decided instead to just glaze it, as is, and see what would happen to the pattern. 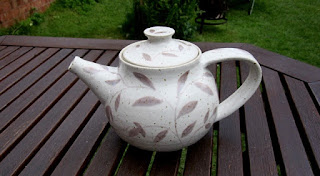 A very surprising result! A sort of tan colour verging on lilac in places. I'm tempted now to try other underglaze colours.  A kiln opening will always produce a few unexpected results. But I'm more amazed these days to take out a pot that looks exactly as I intended it to be.

So in about 4 weeks time I'll be opening my doors for the Warwickshire Open Studio Exhibition. On the same weekend, 18th June, we also have the Leamington Peace Festival. It'll be a very busy weekend in Leamington Spa. 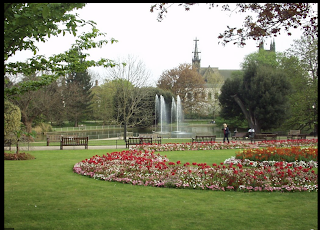