Hello Potters and Friends,
And a hello from Alan. 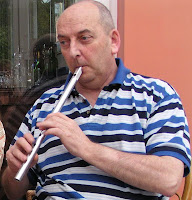 Click on the tunes back at the top which are played by himself on his Irish whistle.
And, the fiddler on Castledawson is none other than me!!

As my foot is still in plaster my main occupation this month has been watching the festive preparations from the comfort of the sofa.
Alan, Rosie, and her partner, Rich, decorated our Christmas tree last week. 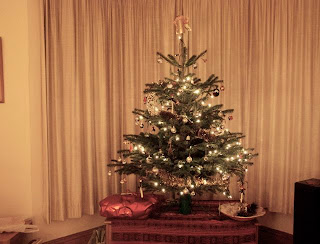 Meanwhile, I could only look out on one of the coldest days Leamington Spa has seen in years. 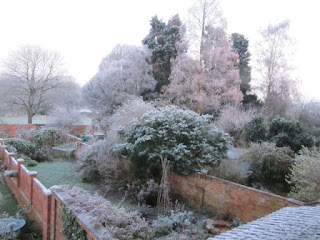 View from the bathroom.

But the kiln kept the basement nice and cosy but not entirely with my pots.  Rosie decided to try hand-building some bowls, and came up with a rather good idea for gifts that have a very festive look. 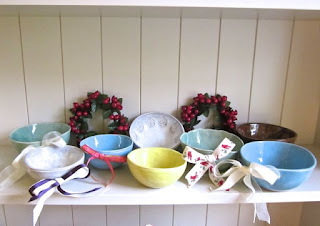 When the pots were leather-hard she made two holes in the sides, about 2cm apart, and when all were glazed and fired she threaded ribbon through and tied a fancy bow. As with all small holes, scrape out a good deal of the glaze before firing, otherwise there is a danger that the holes will close up and disappear.

I fired some gift tags which will be added to my presents. 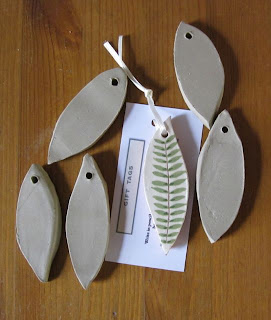 These little ceramic leaves have become my signature now, so I no longer need to sign the underside.

I also decided to re-fire a pot that I thought looked dull and pretty uninteresting. 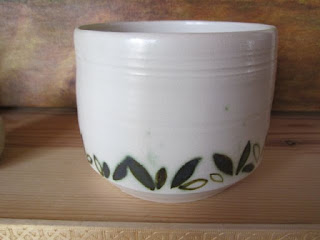 As you may know by now, I love my white satin glaze but this large bowl needed a bit of jazzing up. So I painted these copper oxide leaves straight on to the glazed pot. It sticks to the pot very well without having to be mixed too thick, and it won't run in the re-firing. It takes on a black metallic look with a slight bleeding of green into the glaze. So there you go, saved from being relegated to the back of the shelf.

As Christmas and New Year draws closer I sit and think of what I might do next year. I was told about a porcelain clay called Royale; great for throwing apparently. So I've ordered a bag to try out and see if it's better than my Ming porcelain. I'll let you know.

But until then I hope you all have a jolly time over the holidays and I look forward to reporting back on my discoveries, experiments and hopefully successes next year. 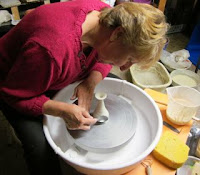