52. A COOLING DOWN PERIOD

Well, coupled with the temperature here in England well below zero this winter, it's also been a bit chilly in my workshop of late. The controller on my kiln just gave up the ghost and said... I've had enough!   I was in the process of firing some commissions at that time but when your tools let you down all you can do is quit.
Here's a peep at the problem. 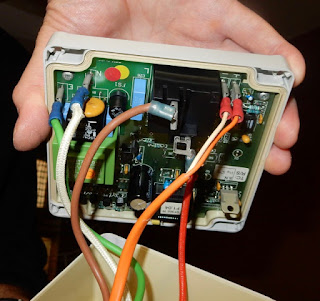 Quite frankly I was terrified. I'm not an electrician and neither is Alan but with the help of Tom from Potclays Supplies who sent us a replacement with coloured tags in the appropriate places, we fumbled our way to success. So with the manual in hand I re-programmed this unfamiliar box, (all programmers had been up-graded about 5 years previously) and with slight fear my commissions were re-packed in the kiln. If you've seen my yellow glaze in previous posts then you can see that these pots came out a lot darker yet brighter than normal. I deduce from this that the kiln is under-firing. Glazes generally pale in higher temperatures. I've yet to test this theory!

So what could I do in the meantime..

Before all went...cool I experimented with a technique called inlay. If you see the previous post you can see the fabulous inlay work of American potter Michael Kline. This method is about layering one coloured clay onto a contrasting clay, then a lot of scraping back. I threw everything at this test piece and I can honestly say that it is more difficult than I thought. 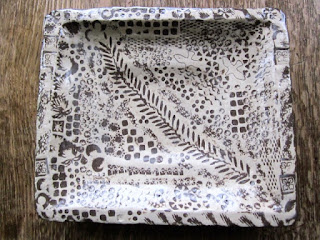 Incidentally, I used a wooden picture frame as a mould. I laid the rolled-out clay on top and then - with a wooden board underneath - I dropped it on the floor. The clay drops into shape straight away. Good trick. But during my enforced rest I could do other things this winter. I have been painting on more pieces of my WWII ammunition box. I've bought some heavily grogged black volcanic clay to try hand-building again. Very satisfying but it rips into your fingers somewhat. So I used the edge of a clam shell to create the grooves. 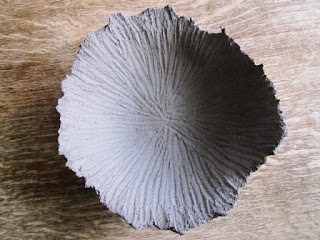 But the most fun is larking about in the park with my grandson, Hector. Can't beat it. 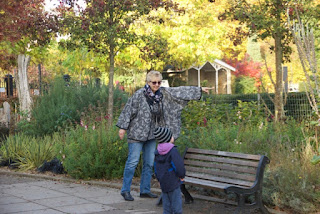 I've enjoyed having this time out and I really believe it does you good.

Posted by Sheila Graham at 18:00 No comments: