Couldn't resist the Shakespearian flavour to the title of this post. My son is working with Benedict Cumberbatch in 'Hamlet' at the Barbican at the moment, so it's part of my world right now.
Crazy times, he tells me. 'Sometimes it's been more like being in a rock concert than a play'.
Indeed, as an actor myself, I've never witnessed such hysteria over a piece of Shakespeare. However, Hamlet is now being seen by people who possibly didn't like having to study Shakespeare at school and who firmly believed they would never have to encounter it again. I applaud Mr Cumberbatch for that.

But on to those commissions.
A successful Open Studio Exhibition always produces requests to re-make the popular pots that have already been sold.
Repeating a piece of work that was a complete one-off, possibly even a result of a mistake, is quite a challenge.

I know some makers who will not take commissions at any price, but I somehow always find myself saying, 'Yes of course I'll make you another one'.  But adding, ' It'll be exactly like that one...... but a bit different'.

So I've made a start. 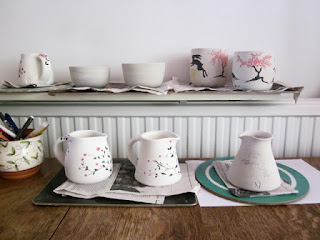 Waiting to be bisque fired.

The painted pots on the shelf at the back were the most popular. Here's the sold one. 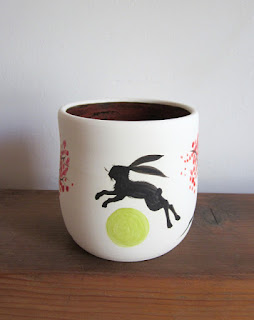 Hare over the Moon

Hares always seem to be very popular, but difficult to make them not look like elongated rabbits.

I've been asked to make a side-handled Japanese teapot for an actor friend. So here's the first one drying out in the workshop. I always make two – just in case. 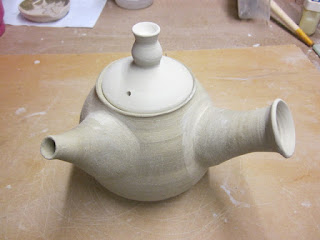 When making anything involving adding handles or spouts, I like to be certain that the fix to the pot is as secure as I can make it. So I made a small amount of paper clay for the purpose. This is the strongest and best sure-fire slurry for the job. 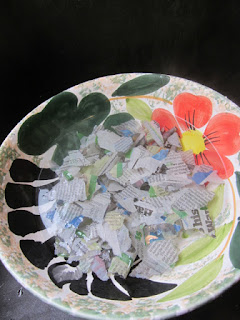 Rip up newspaper and pour on boiling water. When cool, squeeze it out and add it to some liquid clay from your slurry bucket. Roughly, 30% paper, 70% gooey clay. Then whizz it all together with an electric hand whisk and you have the perfect clay glue. 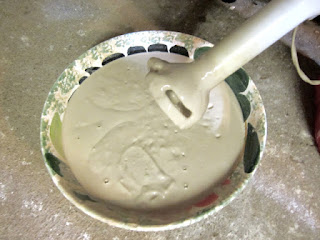 Most of this I put in a sealed container to keep wet and some I dried out and kneaded into a ball to be kept for other uses.

Alan and I took on a fun project during the exhibition before my favourite pots disappeared. We took some photographs to be turned into greetings cards by our local printer. 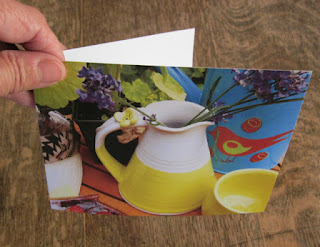 They are A6 size, blank inside and very colourful. 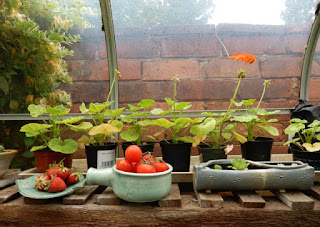 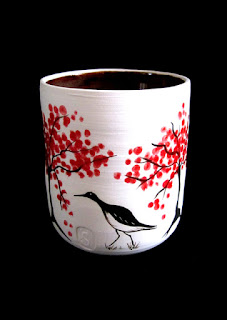 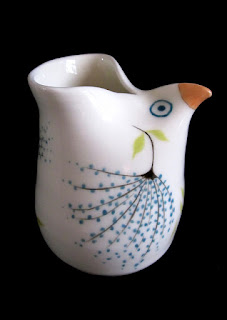 Posted by Sheila Graham at 12:52 No comments: