23. THE POTTERY OF MATA ORTIZ

In this post I thought I would tell you a story.
From the moment that I read about the extraordinary life of Juan Quezada and the Mata Ortiz potters, I have retained such vivid pictures in my mind, and I frequently study the photographs of their work, which inspires me to keep creating and learning.

Here is the man himself. 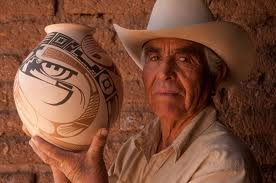 So, the story begins in the early 1960's in Mexico. Juan was a teenage boy in Mata Ortiz and his job was to take his two mules to the forests on the outskirts of the town and collect firewood for his family.

As with a lot of boys he loved exploring, and nothing was more exciting than searching the caves on the mountain side where a lost civilisation of Mexican Indians once lived.
As well as the firewood he began bringing back fragments of painted pottery and sometimes even a complete pot that was made six or seven hundred years before. This collecting soon developed into wanting to know how to make such beautiful pots himself. But no-one in the town knew.  So he began digging for clay around the mountains. If this is where the ancients lived then their clay must be nearby. He experimented with different dyes to re-create the ornate paintings, and after some time he finally discovered black manganese that he ground down then added water.
He had no tools, no teacher, only trial and error. 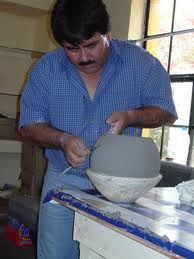 He tried baking his pots in a fire-pit covered with a small metal drum and used cow manure for fuel. Eventually it worked!
His family became interested in what their young boy was producing and wanted to try their hand at it too, so he began teaching them as well as anyone else who wanted to learn. 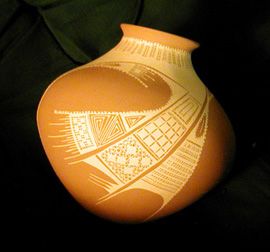 Mata Ortiz was a small dusty town in those days, lacking just about everything, especially work. Industries had come and gone leaving behind a community that found life hard. There was not much else to do but make pots and sell them in the next town or to travellers. 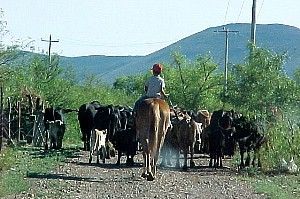 And a junk shop called Bob's Swap Shop in New Mexico is the unlikely location that changed the fortunes of Mata Ortiz.
Some travelling salesmen offered to take a selection of Juan's pots to the United States to see if there was a market for them there. However, at Bob's Swap Shop they exchanged them for clothes instead. But what a lucky exchange that turned out to be. The pots were bought by an American art historian called Spencer MacCallum, who, fortunately, had a fascination for junk shops.
At first he thought they were the original Indian pots, but soon discovered that they were modern, very modern. So he set out to find the potter. And very quickly he did. MacCallum was so in awe of the boy's talent and tenacity that he offered him a monthly salary if he would keep making pots. It seemed to be a gift from heaven. Everyone joined in. 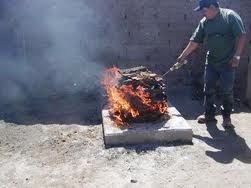 Some built the fires; some sanded and smoothed the leather-hard pots; some coiled and shaped; some dug for clay and oxides; some painted patterns; some wrapped and packaged. They had a new industry and Juan Quezada was at its helm. 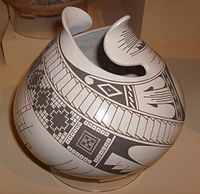 Today there are 400 potters who live and work in Mata Ortiz and their economy has changed dramatically.
Their pots are sold worldwide and are still made in exactly the same way as they were 50 years ago.
The brushes used for the fine painting are still made from strands of children's hair. 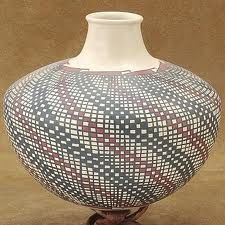 In 1999 Juan Quezada was awarded The National Art Award by the Mexican government – the greatest honour given to any artist in the country. 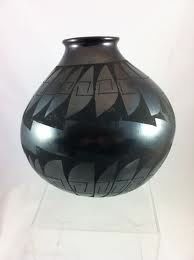 Many websites and Youtube videos well document the many artists, their pottery and their techniques.

So take a look, sit back, and be amazed.

Posted by Sheila Graham at 13:15 No comments: