30. MAKING FOR THE KITCHEN.

Our summer exhibitions are just around the corner starting in May, so over the past couple of months I've been doing some serious thinking and drawing in order to create new work. I want to surprise people by putting out a different style, and hear them say 'Oh, I haven't seen this before'.
So, my workshop is producing a lot of kitchenware at the moment. I've always produced cups and jugs but this year I'm really going for it!
And to begin here are two pestle and mortars.
First the conventional type. 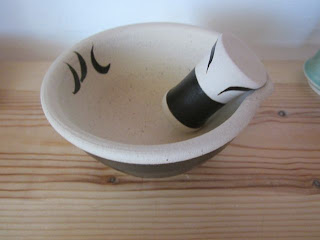 Stoneware. Unglazed on the inside and on the end of the pestle in order to get a good grinding contact. As the pestle is so chunky and solid, I left it to dry-out for about a week before bisque firing. Any moisture lurking in the middle could blow the whole piece open.

Now for something a little bit different. 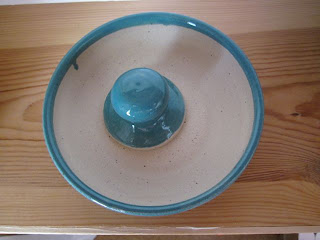 Stoneware. A flatter, shallower bowl but with a pestle that resembles a door handle.

I saw something like this on Nigel Slater's TV cookery show but have since discovered that it was made for him by a potter who has since stopped selling them. So, here we are. It works and it looks great. I haven't used this turquoise glaze before but I'm beginning to love it.

So next up comes painted cereal bowls. 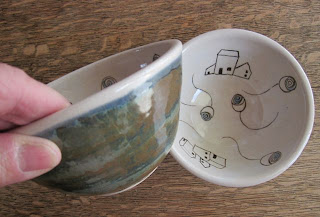 Painted with black and blue stains before the bisque firing, then transparent glaze inside and my smoke glaze outside. I hope to catch the eye with these.

Potted herbs from the supermarket take up too much of my valuable work space so this is my solution. 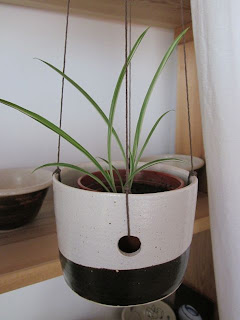 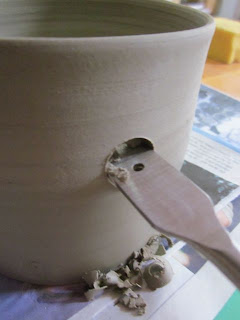 Alan suggested he used his drill to create the large holes that I wanted. I was horrified! I really didn't think it would work but....it pains me to say it....I was wrong. At leather hard stage it worked like a dream.

Out of a bisque firing yesterday. 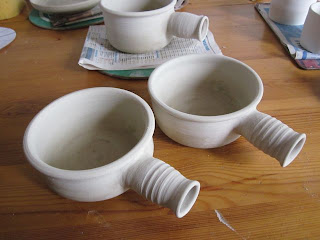 Small casserole dishes - oven to table - as the cook shops like to say.

And here's how I made them. 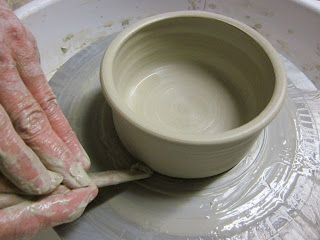 Straight sided cylinder with a rolled rim. (See post 28). Cut in at the base to give a nice finished look. 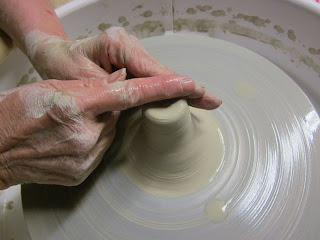 The handle. I threw enough clay to make two handles - the first being thrown off the hump, as small amounts of clay are quite tricky to get centred. 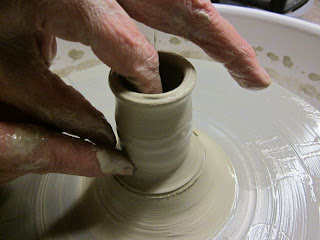 Mark the clay with a finger to indicate where to cut it off. 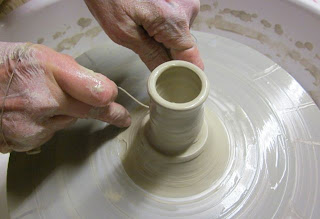 When pulling my wire through I always bring one hand round to meet the other as the wheel very slowly turns.

When both are leather hard I cut the handle to the length I want, then cut this sort of shape... 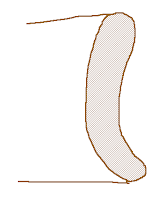 This will then snuggle nicely with added slurry onto the rounded side of your pot. For added security I press a very thin worm of clay around the join.

And to finish here is some
WARWICKSHIRE NEWS

We have a tea and coffee shop in town called VINTEAS. They take you back to a genteel time when cups and saucers were the tea drinkers' preference. 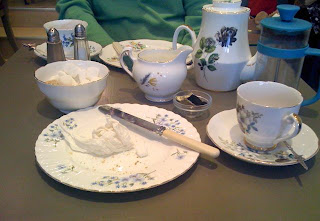 And last Friday lunchtime The Gallery Trio entertained us with a little bit of 30s and 40s music, with a touch of classical thrown in. 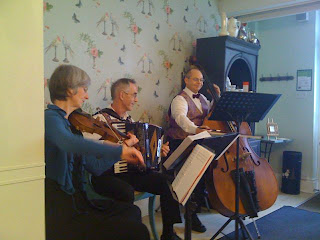 Posted by Sheila Graham at 10:47 No comments: