Hello Potters and friends,
We're nearing the end of October and Warwickshire doesn't know if it's summer or autumn. It was freezing last week but today the sun is warm and shining brilliantly. I spent a good deal of time on the wheel in the basement last week and, boy, did I know then that the season had changed. Got to get an electric fire going down there.
The AMA Exhibition at Holy Trinity was a great success in terms of sales and interest in our group. In fact my shelves look a little depleted right now. So, cold or no cold, I'll be in the basement for the next few weeks.
I've got two exhibitions coming up. The first is an Open Studio here at the house, joined by Rosie exhibiting her jewellery, and friends, Steve and Kay, who are just back for the winter from their home in France, and are selling their wood carvings and hand-knitted throws. The second is a Contemporary Craft Fair at the Civic Hall in Stratford-upon-Avon.
So, what's coming out of that kiln, I hear you cry. 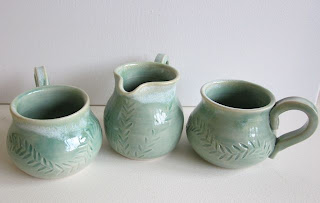 I just love making cups and jugs. And I have to say, these have worked well on several levels.
Firstly, the glaze.
This is called 'Green Hue'  and I buy it from Potterycraft. My usual method of preparing to dip a piece is to get my hands in the glaze bucket and give it a good stir to break up any lumps that have sunk to the bottom. However, for reasons unknown but maybe because it was so cold, I used a hand whisk and found it did the job much quicker and more thoroughly, because it fired to a beautiful pale, jade-like colour that I haven't achieved for a long time. 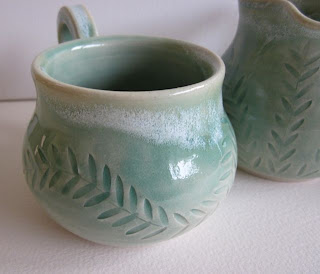 Also, I have a leaf-shaped tool that was designed for carving wax that I had pressed into the clay in order that the glaze would pool in the depressions and appear darker. I couldn't have been more pleased and I have since gone slightly crazy putting this pattern on everything.
If you're not too confident with drawing or painting this is a great way to add interest to a piece.
By the way, the rim was dipped in a white glaze in order to get that snowy effect around the top.
I love adding one glaze to another - after doing a small test piece first, of course. 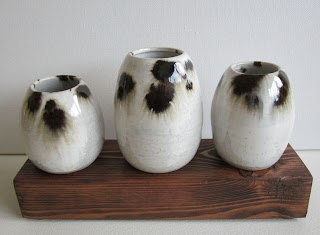 This is a zinc based white, glossy glaze onto which I flick a dark blue glaze (Lagano Blue, from Scarva Pottery) from a stiff paint brush. This is a table centrepiece that I sell with the wooden stand, that Alan kindly cuts and I stain and wax. These multi-vased pieces were inspired by Edmund de Waal's 'Water Shed' exhibition a couple of years ago. Mind you, Edmund had a couple of hundred pots lined-up, but when I get longer pieces of wood I'll be aiming for five, or maybe, even seven.
Making another of my big, press-moulded bowls (as in Post 1 Goodbye Clingfilm) I always have some rolled-out clay left over that used to go in the slop bucket. But I've found a better use for it. 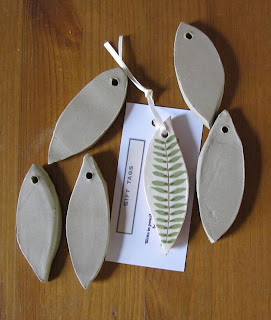 Leaf-shaped Gift Tags!
I paint and glaze one side leaving the back for writing on in pencil. This is easily erased by the recipient and - if they can bear to part with it - used again.
Well, before I end this post I have to show you the latest stage of the 'embossed' sweet potato, (first coming to life in Post 7 Family Matters and the Price of Potatoes)
It's out of the clay mould and the two halves are slurried together, and still drying out before bisque firing. 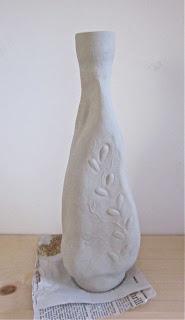 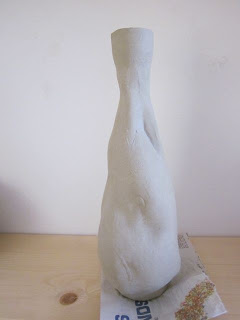 Both sides. Pretty cool, eh!
I'll admit I'm getting a little bit obsessed with this potato thing, and I haven't even got one glazed yet. But those spuds can create shapes that I would never have dreamt up.
Happy potting Folks
Posted by Sheila Graham at 16:54 No comments:

7. Family Matters and the Price of Potatoes

Hi potters and friends,
Well, just look what's been happening in our house this month. 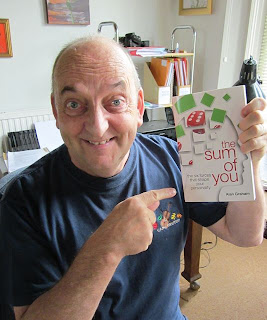 Alan's new book called 'The Sum of You' has hit the shops and Amazon! It states on the back - 'Are you a philosopher, an explorer, a gambler, an artist, a scientist, an environmentalist, or are you all of these things? ' He's wanted to write this book for a long time, exploring through story-telling and humour, how we all use and respond to numbers. It's not your conventional book on maths but then he's not your average mathematician. Well done Alan!
And while on family matters, here's something completely different. 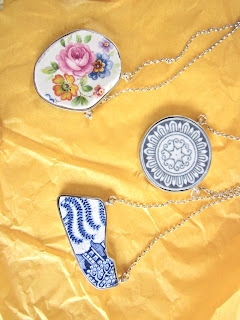 Rosie Bill's  Lost and Found Collection.
Our daughter Rosie is a silversmith and she takes fragments of very old pottery, cuts them, files them and sets them in silver.
I sneaked into her workshop the other day and took this photograph before she wrapped everything up and posted it to a gallery.
But this month she is also very pleased with herself for opening an on-line shop. So you might like to take a look at her website here.  The url for her site is www.rosiebill.co.uk  And well done Rosie!
But what have I been doing this week?  Well, I 'm selling a fair bit of pottery at the AMA Exhibition that I told you about in the previous posting. I'm told by my customers (and not for the first time) that I sell my work too cheap. Maybe, for some items, I do but I love seeing my work going off into people's homes, and seeing people getting pleasure from what my head and my hands have created. But this is a perpetual dilemma for all artists and I guess it always will be. If we realistically charged for our time we would probably price ourselves right out of the market.
So I keep it simple and work it out like this; I let some pieces go a bit cheaper and make up the difference on others.
But what have I actually been doing this week? Well, here it is. 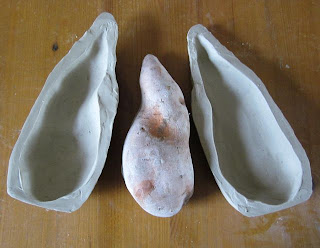 In Blog 5. 'Sweet Potato and Cumbrian Stone' I suggested wrapping a potato in clay to make a mould if no plaster was at hand. This is mine - cut open at leather-hard stage and the potato removed, and as you can see by the state of it, now residing in my compost heap.
I then thought I'd try cutting into the clay so that the pot will have a relief pattern when turned out. 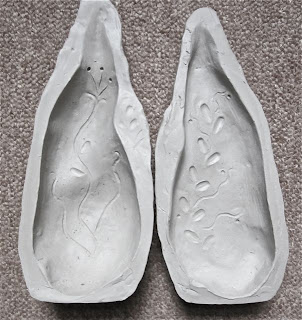 As I started to do this I suddenly had doubts. Not least because the phrase "Less is More" is never at the forefront of my mind. Did I really want these lumps and pimples all over it? But then I realised that if it didn't look good on the pot, I can sand it down before firing, whereby, it will look like they never existed. It's rare that you can rectify a mistake so easily.
So, these will be bisque fired next week when completely dry, and then they will be ready to go.
I look forward to showing you my entire potato collection when they're glazed, on the shelf and, of course, priced.
Happy potting folks.
Posted by Sheila Graham at 16:50 No comments:

Email ThisBlogThis!Share to TwitterShare to FacebookShare to Pinterest
Labels: pricing, Rosie's jewellery, Sum of You

Hello potters and friends,
It's the 2nd October and, incredibly, the weather remains hot, hot, hot, here in the middle of England. This made quite hard work of the lifting, carrying, pushing, stretching and all that setting up an exhibition entails.
This weekend was the opening of our first show to kick off the 'winter' season and this took place in Holy Trinity Church at the north end of town. Good thick church walls make for a lovely cool atmosphere and the setting-up committee was very grateful for that. 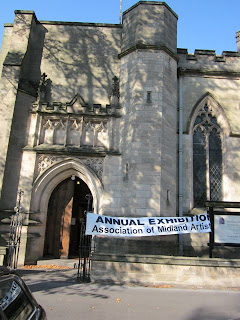 I called on Alan to help me put up the banner. It took three attempts to get it to this cock-eyed angle but I think it will do the job.
The exhibition is put on by The Association of Midland Artists. (AMA) and I discovered that I was to be the only potter exhibiting amongst the many painters. 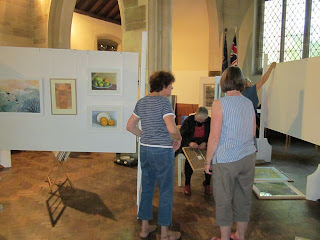 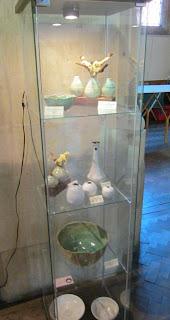 My cabinet, filled and lit.
So this is how my week panned out.
Firstly, I got together my most recent work and bearing in mind that I only have 4 small shelves I wanted a complimentary colour scheme. However, as most of my work is glazed green and white I decided to go for green and white. But I did splash out on some dried, yellow flowers to attract attention to the  centrepiece table vases.
Now, I wouldn't call myself finicky or even a pernickety type of person, but I do like smart-looking labels that stand nicely by each piece. No-one will ever remember your labels, nor will they compliment them but they will be remembered if they appear a bit tatty and dashed-off. It could indicate to the customer a lack of care and they possibly may apply that to your work. And that could be far from the truth.
A friend once said to me as she carefully laid a table for a dinner party 'Presentation is everything.' So I gave the cabinet a good clean and washed all the pots.
My last job, and, yes ok, you could call me pernickety over this, is checking each pot to make sure that no lumps of batt wash are stuck to their bottoms. Nor do I like to feel a rough bottom that grogged or speckled stoneware clay can have. I don't want my buyers to hate the pot they've bought because it has scratched their polished wood furniture.
So I use a coarse diamond file designed to sharpen garden tools, and this fits the bill exactly. Bought from Amazon, not expensive and it will even remove glaze from unwanted areas. It works best when wet and accompanied by a couple of minutes of elbow grease.
But before signing out of this post I thought I'd show a new departure for me that came out of the last firing but wasn't right to be displayed in the cabinet. 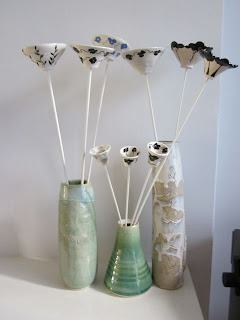 These are my flowers - for garden or home 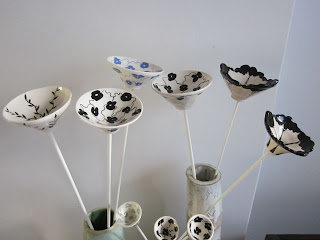 Hand-painted inside and out. Took ages but very satisfying. 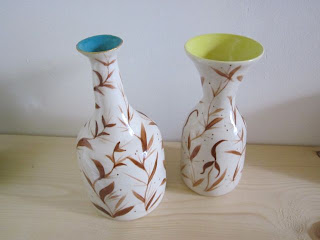